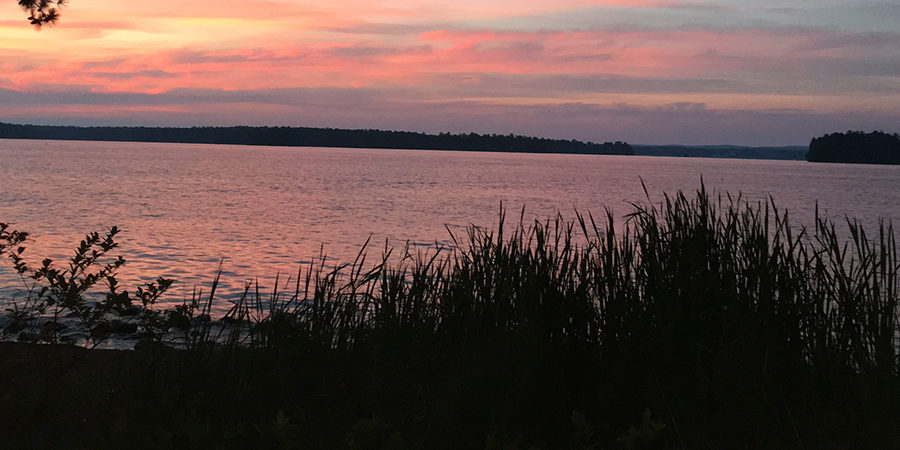 Sales: There were 13 waterfront properties sold on Lake Martin during January, a 27.8 percent decrease from one year ago, when 18 lake homes were sold. Current sales totals are 14 percent above the five-year average of 11 January sales. The 10-year peak for January waterfront sales was in 2017, when 18 lake homes were sold, while the January trough hit in 2008, with one unit sold.

Forecast: January’s 13 waterfront sales were one unit or 7 percent below the Alabama Center for Real Estate’s monthly forecast. ACRE forecasts a total of 346 waterfront sales on Lake Martin in 2018, a slight decrease from the 349 lake homes that were sold during all of 2017. 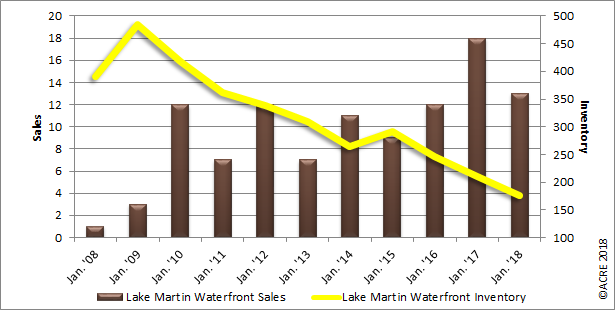 Pricing: The Lake Martin waterfront median sales price during January was $415,000, an increase of 12.8 percent from one year ago and an increase of 26.9 percent from the prior month. Pricing will fluctuate from month to month because of changing composition of actual sales and the sample size of data (closed transactions) being subject to seasonal buying patterns. ACRE recommends contacting a local real estate professional for additional market pricing information.

Demand: January waterfront sales decreased 43.5 percent from the previous month. This trend is consistent with historical data indicating that January sales on average (’13-’17) decrease from December by 38.3 percent. Waterfront homes selling in January averaged 223 days on the market, representing a 22.3 percent decrease from one year ago. Homes on Lake Martin’s waterfront are currently selling 5.1 percent faster than the five-year average of 235 days on the market.

Seeking balance: The inventory for sale divided by the current monthly sales volume equals the number of months of supply. The market equilibrium (balance between supply and demand on a non-seasonally adjusted basis) is approximately 6 months. During January there were 13.5 months of waterfront housing supply, up from 6.5 months last month and up from 11.7 months one year ago. In other words, at the January sales pace it would take 13.5 months to absorb the current inventory for sale.

Industry perspective: The recent headlines in the real estate world have revolved around rising interest rates. As of Jan. 31, the interest rate on a 30-year fixed-rate mortgage was 4.38 percent. This is up from 4.18 percent on Jan. 10 and up from 4.08 percent on Dec. 6, 2017. The stock market has rebounded somewhat from its large selloff on Friday, Feb. 2, and Monday, Feb. 5, as investors adjust from an accommodating monetary policy to one with some inflation and higher interest rates. The recent market decline is a signal of a return to normalcy and higher debt costs. Rising interest rates, however, do not cause housing activity to come to a halt, in the same way that rising rates do not cause businesses to go into hibernation. In the spring of 2006, the Federal Reserve stopped raising interest rates after raising rates 16 times over a three-year period. The economy was performing well during this time (2004-2005) of rising interest rates. The Great Recession happened, interestingly enough, at a time when interest rate increases were halted.

Home ownership rates increased to 64.2 percent during 2017 after falling to a post-1965 low of 62.9 percent in 2016. Not surprisingly, home ownership rates peaked during 2005 at approximately 69 percent. Millennial home ownership rates are also on the rise as their employment situations continue to improve. Millennials, in fact, have been recently credited with an improvement in suburban housing markets as not all are city dwellers. This rise in home ownership was highlighted recently at the annual TrendLines 2018 program in Washington, D.C., with an analysis of Census Bureau housing data presented by Sage Policy Group, Delta Associates and Transwestern. The following excerpt is from the closing paragraph from the homeownership report, and is encouraging news for residential real estate markets across the nation:

“This year, the most common age in America will be 26 years old. There is also an abundance of 25- and 27-year-olds. All of these people are millennials, America’s largest and most educated generation. As more of this demographic block marches into their 30s, demand for ownership opportunities will rise. While there may be downturns that occasionally suspend these demographics, the next decade stands to emerge as a period of rapidly expanding home ownership and single-family homebuilding in America.”

Create A Real Estate Portal
With a personal account you are able to:
Go to Top